Replacement heifers are the future of the dairy herd, but very little research is focused on these animals. Researchers at the University of British Columbia’s Dairy Education and Research Centre have recently completed three experiments designed to determine the effects of different methods of feeding weaned 5-8 month old Holstein heifers. 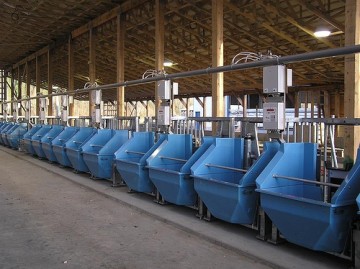 For all three experiments, electronic feed bins were used that identify individual heifers housed in a group pen and record the timing and amount of feed eaten during each visit to a feed bin (Figure 1). Feed samples were also taken to determine if heifers preferentially selected certain components of a total mixed-ration.

There are different strategies used to feed replacement heifers. One approach is limit feeding, where they are fed a restricted amount of a nutrient-rich diet. But limit fed heifers typically spend less time eating than they would under natural grazing conditions and spend more time standing (not eating) and may show higher rates of vocalization associated with hunger. An alternative to limit feeding is to provide unlimited feed that is less nutrient-dense so that the heifers can eat as much as they like, when they like. A less nutrient-dense diet is achieved by diluting the diet with a low-quality feedstuff, such as straw.

Adding straw to the diet changed the feeding behavior of heifers in several ways. Adding straw increased average meal times from 38 minutes on the control diet to 41 and 43 minutes, for 10% and 20% straw, respectively. This translated into more time spent feeding each day. Heifers consuming the 10% straw ration spent 13 minutes longer eating each day and those on the 20% straw ration ate for an extra 19 minutes. Heifers fed with 20% added straw also decreased feeding rate, meal size and number of meals consumed per day.

These changes in feeding behavior were due in part to an increase in time spent sorting. Heifers sorted their feed preferentially for concentrate and smaller particles (corn silage) and selected against long particles (straw).

These results suggest that adding 10% straw may be optimal in terms of reducing feed costs and satisfying natural feeding behavior without slowing growth.

Our second study focused on the effects of feeding methods on feed-sorting behavior in heifers. After a week of adaptation, six heifers were tested on each of the three treatments for 1 week each. Treatments consisted of 2 kg of grain concentrate and unlimited grass hay provided in three different ways; separately (grain and hay), as a top-dressed ration or as a total mixed ration (TMR).

When heifers were fed grain and hay in separate bins or the grain was top-dressed on the grass hay, heifers quickly ate the grain in a few large meals before they began eating the hay. When the two feed components were mixed together (i.e. TMR) the feed intake of each component was more balanced throughout the day and feed sorting behavior was reduced.

Given the high forage component of growing heifer diets it is expected that feeding times will be longer than 3 hours per day. Moreover, given that heifers are fed and tend to eat at the same time, it is important to consider how much competition there is for access to feed and how this affects their feeding behavior. These factors were investigated in the third experiment.

Heifers in the competitive treatment spent about 15 minutes less time feeding each day, had 9% fewer meals per day and ate larger, longer meals. To maintain the same intake, they ate faster to compensate for the shorter feeding times in the competitive situation. The day-to-day variation in feeding behavior also tended to be higher in the competing heifers.

In conclusion, providing the diet in the form of a TMR minimizes sorting behavior by heifers, and diluting this with some low-quality feed such as straw increases feeding time. Providing adequate feed bunk space for each heifer is also essential as it will allow all animals access to feed at peak feeding times, when they are highly motivated to feed.

We are grateful to Hanna Miedema for help preparing this report. For further information, please email Marina von Keyserlingk or Dan Weary.

We thank the researchers and staff of the UBC Dairy Education and Research Centre for their hard work on the studies described in this report. This research was funded by the NSERC Industrial Research Chair in Animal Welfare with contributions from the Dairy Farmers of Canada and many others listed at awp.landfood.ubc.ca. 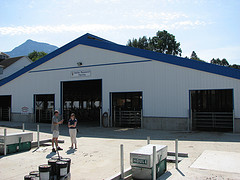 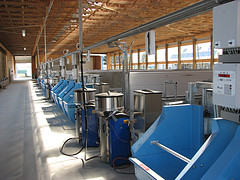 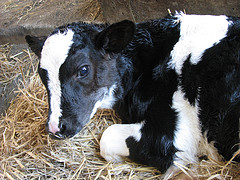 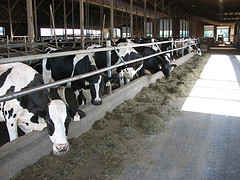 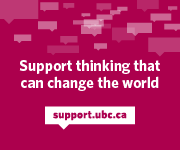